Taking Inventory of My Stewardship 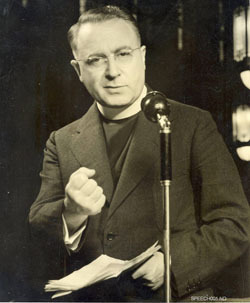 A year after the formation of the National Union for Social Justice, Fr. Coughlin was clearly disaffected and disappointed about the potential for his sixteen-point platform to influence the course of the New Deal. In this broadcast, Coughlin evaluated the actions of the Roosevelt administration in comparison with his own ideas of economic and social reform, and concluded that the president had failed to live up to the promise he had exhibited in 1933. This speech marks Coughlin's first open break with the Roosevelt administration, and the beginning of his hostile attitude towards the president.

← Quack Remedies for the Depression Malady
Next Page:

The Message of the Encyclicals for America Today →