Quack Remedies for the Depression Malady

The economic stagnation of the Great Depression was not immediately lifted by Roosevelt's New Deal legislation. In response to the continuing pressures of unemployment and inflation, various people around the nation proposed alternative economic plans that they believed would successfully alleviate the pressing financial woes. Dr. Francis Townsend from California, for example, proposed the institution of an old age pension of $200 a month, to be paid for through a 2% national sales tax. Senator Huey Long (D-Louisiana) formed the "Share Our Wealth" society, which lobbied for much more radical economic reform than had been enacted to that date, including governmental confiscation and redistribution of large family fortunes. Both of these plans had garnered enough support to seem to threaten the success of Roosevelt's New Deal; in fact, Roosevelt proposed his own old-age policy, the Social Security Act, in response to the popularity of the Townsend Plan. Both the Townsend Plan and the "Share Our Wealth" plans were endorsed by Father Charles Coughlin, and they were included as part of his Union Party platform in the 1936 election. 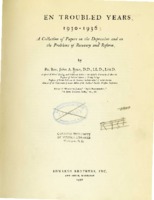 Ryan, a life-long proponent of economic reform and an enthusiastic supporter of the New Deal, felt compelled to offer his opinion on the relative merits of these and other schemes for economic reform. "Quack Remedies" is Ryan's analysis of the Townsend and "Share Our Wealth" plans in particular; he also critiques such ideas as the government ownership of the Federal Reserve System and radical credit reform, both of which had been promoted by Father Coughlin. Ryan believed that all of these plans were economically unsound, and would lead to worse conditions for the working classes. Instead, he advocated industrial reform (such as the NRA), regulation of commerce, and the increase of business as the best remedies for the Depression woes.

Taking Inventory of My Stewardship →