Catholics and the 1936 Roosevelt Victory 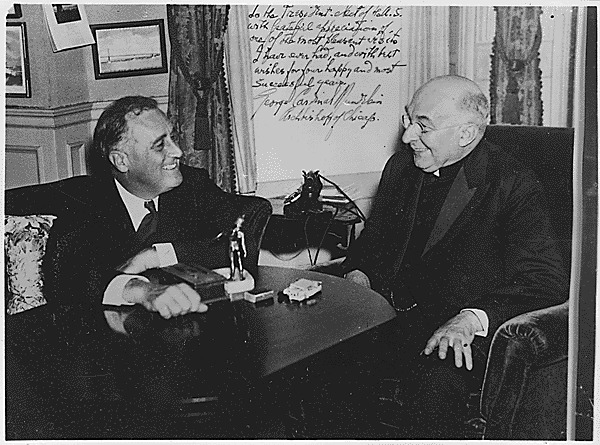 Millions of Catholic voters helped bring Roosevelt his landslide victory in 1936.  Estimates of the number of Catholics voting for FDR range from 70% - 81%.  FDR supporter Fr. John A. Ryan estimated that 70% of the Catholic clergy voted for the President.  Father Maurice Sheehy, another pro-Roosevelt priest, estimated that 76% of Catholics voted for the incumbent.[i]  Several prominent members of the Catholic hierarchy, particularly Cardinal George Mundelein of Chicago and Cardinal Patrick Hayes of New York, expressed warm approval of Roosevelt and the New Deal programs associated with his administration.

Nonetheless, while most Catholics living across the United States supported Roosevelt over the other choices, they were by no means uniform in their politics and there were many vocal critics of the President among them.  Catholics may have comprised the largest religious denomination in the country at more than 20 million, but in many cases they were both insulated from the broader society due to persistent anti-Catholicism in the general population and from each other due to ethnic differences among them.

American anti-Catholicism had been on full display during the Presidential campaign of 1928.  In that year, Al Smith, the first Catholic ever to be nominated for President by a major party, secured the Democratic nomination.  Smith is credited with drawing millions of urban ethnic voters to the polls and into the Democratic Party, but he lost the election, giving Herbert Hoover a landslide victory.  Anti-Catholicism wasn’t the sole reason for Smith’s crushing defeat (his stance against Prohibition was another), but it contributed immensely, particularly among native-born white Protestants living outside America’s largest cities.  Smith’s Catholicism was the grounds on which the Ku Klux Klan, Protestant ministers and even local political officials campaigned against him.[ii]   If Smith were president, they charged, the pope would control America.  This cartoon circulated during the campaign and illustrates this particular prejudice. 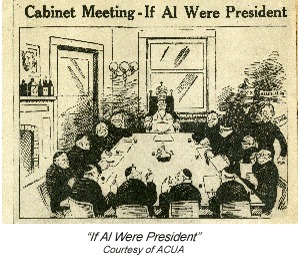 Ethnic Catholics, on the other hand, flocked to the polls to vote for Smith.  In the 1930s most Catholics lived in cities, were working class, and were far more likely to be an immigrant or recently descended from one than their Protestant counterparts.  Before restrictive immigration laws were put in place in the 1920s, millions of Catholics flowed into the country; more than one million Catholics entered the country in each decade between 1880 and 1920.  Migrating successively from Ireland, Germany, Poland, Hungary, Italy, and other parts of Europe, these immigrants tended to cluster in their own communities for at least one or two generations, and the later groups of immigrants in particular established “national” churches for members of their own ethnic group, a way of easing their transition into the American church.[iii]  These ethnic Catholics remained loyal to the Democratic party throughout the 1930s.  Organizations such as the National Alliance of Bohemian Catholics, Lithuanian  Roman Catholic Alliance, Polish National Catholic Church, and Slovak Catholic Sokol expressed public support for Roosevelt and the New Deal during the 1936 presidential campaign.[iv]

← The 1936 Presidential Election
Next Page: