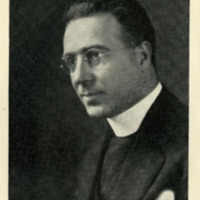 Father Coughlin's rising popularity and national visibility as a radio personality led to the publication of a collection of his sermons in 1931. In the prologue to the collection, reproduced here, Coughlin discusses how his show has "at no time been remiss" in denouncing both the moral and political evils of communism, socialism, pacifism, and internationalism, all of which he claims are antithetical to both "Catholic doctrine" and "American civilization." Like the other Catholic radio hosts, Coughlin felt compelled to apply Catholic teachings to national and international situations; his conclusions, however, are sometimes very different.

The radio sermon "Christianized Democracy," which is reproduced here as well, is an excellent example of these popular attempts to combine Christian teachings with American concepts of liberty. In this discourse, Father Coughlin discussed the economic upheavals of 1929-1931 as a natural product of the bad--and, he said, un-American--economic practices of the previous decade. He quotes Leo XIII's Rerum Novarum, which had condemned harsh usury and unjust materialism practiced under the guise of unfettered capitalism. Coughlin insisted that the answer to the economic problems, however, could not be found in radical political movements such as Communism. Rather, Coughlin believed that the principles of Rerum Novarum and Catholic social doctrines implicitly defended the proper exercise of democracy.

← Social Doctrine in Action: A Personal History
Next Page: