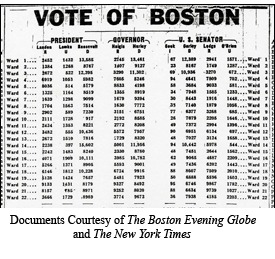 Here is voting data for Roosevelt, Landon, and Lemke as published in the Boston Evening Globe and The New York Times on the day following Roosevelt's victory. The figures are broken down by ward and precinct. The final pages show the votes by states for Roosevelt and Landon, and compare the numbers to Roosevelt's 1932 election over Hoover.