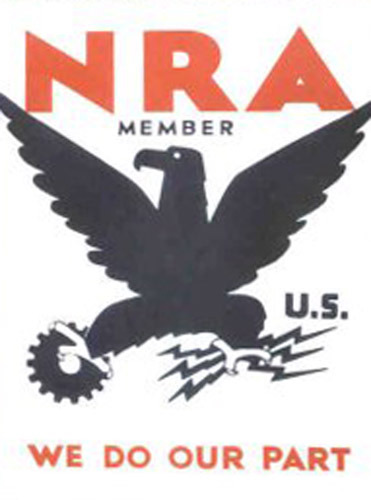 NRA Logo
Courtesy of the Library of Congress
Public Domain

In June 1933, Congress passed into law the Roosevelt administration's National Industrial Recovery Act, which created the National Recovery Administration to guide the creation of regulations for all areas of industry. Most Americans, eager for any government action that might alleviate their financial distress, greeted the legislation with enthusiasm. Many Catholic thinkers expressed strong support for the NRA, believing it embodied Catholic principles outlined in the papal encyclicals. By early 1934, however, a presidential investigation into the growing number of complaints by small-businessmen against the NRA led to the publication of the Darrow Report. This Report concluded that the NRA encouraged the growth of monopolies and cartels at the expense of small businesses and labor. In response to these findings, Roosevelt established the Industrial Appeals Board to mitigate the adverse effects of the NRA. Roosevelt appointed Father John A. Ryan as one of three members of the board.

Ryan's knowledge of and involvement with the NRA was extensive. From the time of its inception, Ryan had supported the Act as a welcome piece of progressive legislation. After the Darrow Report raised serious questions about the fairness of the NRA, Ryan deemed it necessary to offer a defense of its principles. In October of 1934, he gave an address to a meeting of the National Conference of Catholic Charities in Cincinnati. He acknowledged that the NRA was not comprehensive enough to eliminate the Depression altogether, but offered a plea for its continued existence as there was as yet no proposal to erect any comparable legislation in its place. As a man committed to social reform, Father Ryan believed that the lack of industrial regulations would only exacerbate economic suffering. Instead of scrapping it altogether, Ryan advocated that efforts should be made to modify the NRA in ways that would make it more protective of the common good and which would bring it even closer in line with the principles of Catholic social teachings. The text of that address, "Shall the NRA Be Scrapped?", is reproduced here. Note: In May of 1935 the Supreme Court struck down the NRA as unconstitutional. 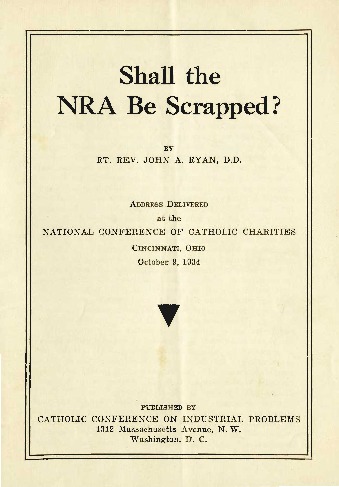 "The National Union for Social Justice: Preamble and Sixteen Points." →