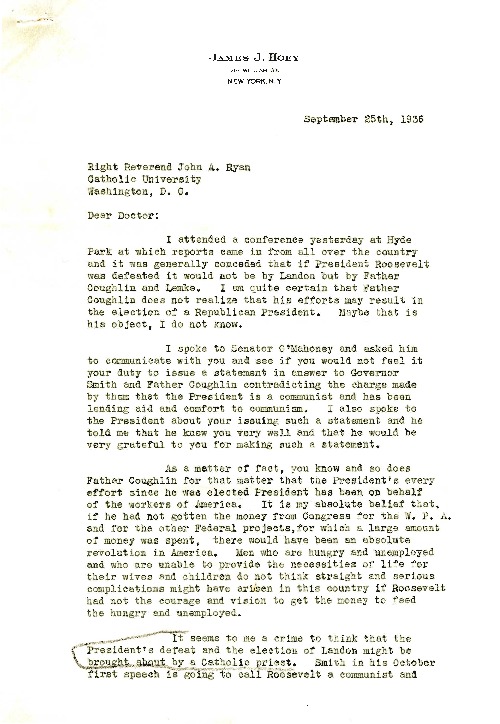 Father Ryan avoided public comment on Coughlin's inflammatory speeches for most of 1936. He believed that public political arguments between two priests would harm the cause of the Church without accomplishing anything for the cause of social justice. But as the presidential election approached, Coughlin's National Union for Social Justice (NUSJ) seemed to pose a serious threat to Roosevelt's re-election. The Democratic National Committee reached out to Ryan through his old friend, James Hoey, a real estate broker and active Democrat who had become Collector of Internal Revenue in New York. Hoey expressed the Democratic Party's concerns about the Union Party's prospects, and especially about Coughlin's criticism of the President and his administration. Hoey, along with Senator Joseph O'Mahoney of Wyoming, requested that Father Ryan make some speech rebutting Coughlin's charges and offering his own analysis of Coughlin's economic theories. Ryan accepted the task, and spent several sessions with Hoey, O'Mahoney, and Charles E. Michelson, the Democrats' publicity chairman, in editing and revising the speech. The documents here consist of correspondence between Hoey and Ryan during the drafting of the "Roosevelt Safeguards America" speech, as well as Hoey's judgment of the speech's effectiveness following its delivery on October 8.