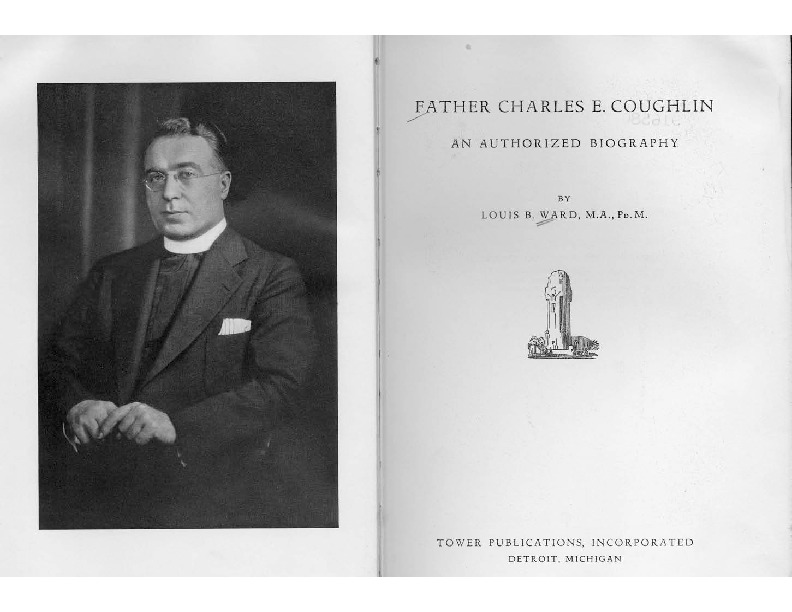 Father Charles E. Coughlin was already a nationally recognized figure by the time of the 1936 presidential election. He was appointed to build a new parish in Royal Oak, Michigan (a suburb of Detroit) in 1926, and that same year he began broadcasting weekly radio sermons. When his broadcast was picked up for national syndication in 1930, the popularity of his show skyrocketed: for the rest of the decade his show was second in popularity only to President Roosevelt's weekly "fireside chats." Part of Coughlin's success lay in his promotion of Catholic social and economic theories, based in part on the ideals of the papal encyclicals Rerum Novarum and Quadragesimo Anno and in part on his own ideas about social justice. For people suffering from the economic deprivations of the Great Depression, Coughlin's preaching suggested the possibility of relief and reform.

This excerpt from a biography of Father Coughlin discusses his childhood, education, and early ministry at the Shrine of the Little Flower in Royal Oak. It also describes the beginnings of his radio ministry and the explosion of his popularity as a broadcaster during the early years of the Depression. The Rev. Michael Gallagher, bishop of Detroit, wrote the preface to the work, an example of enduring loyalty and support that he would offer Coughlin until the end of his life.

An account of the life, work and message of Reverend Charles E. Coughlin, 1933 →