"The National Union for Social Justice: Preamble and Sixteen Points." 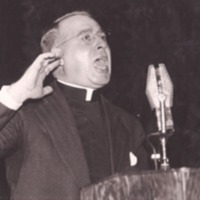 Click on photo for "The National Union for Social Justice"

By late 1934, two years of New Deal programs had failed to produce adequate relief for thousands of Americans, and Father Coughlin decided that his steady stream of letters from distraught listeners gave him a mandate to act on their behalf. On November 11, he announced the formation of the National Union for Social Justice, intended to function as a lobby for the promotion of social justice in the economic life of the United States. In this reprint of the broadcast, Coughlin outlines the sixteen-point platform that would underpin the NUSJ's activities, which he believed would carry out the ideals articulated by the papal encyclicals. Membership in the NUSJ was open to all Americans, regardless of their faith; the emphasis of his broadcast is on the economic well-being of the entire community rather than a call to action specifically to Catholics.