The Message of the Encyclicals for America Today 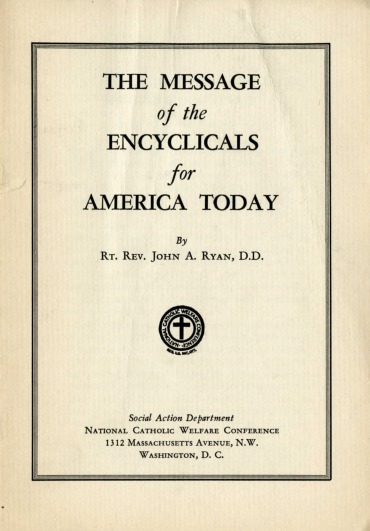 Two important papal encyclicals shaped John Ryan's interest in economic and social reforms: Leo XIII's Rerum Novarum of 1891 and Pius XI's Quadragesimo Anno of 1931. Both encyclicals addressed such problems as the inequitable distribution of wealth and the proper relationship between capital and labor. In the document reproduced here, Ryan describes what he sees as the causes of the unequal distribution of wealth in the U.S. and expounds on the social philosophy contained in the two encyclicals, specifically focusing on how application of the papal teachings could solve the American economic crisis. For example, Pius XI had called for laborers, farmers, and all wage earners to have "ample sufficiency"--that is, enough to meet their needs and to survive an emergency. If this social philosophy had been put into practice before 1929, he claims, the catastrophe of the Great Depression could have been avoided.

When the encyclicals were first promulgated, the papal teachings were viewed by some as radical, even revolutionary, proposals for the redistribution of wealth. By 1936 when Ryan published this pamphlet, many of the measures called for had been enshrined into law through the legislation of the New Deal. Roosevelt's program of economic reform, however, was drawing increasing criticism as the presidential election campaign commenced, especially by political conservatives who viewed Roosevelt's increasing popularity with alarm.

← Taking Inventory of My Stewardship
Next Page: